Voice: Common Nighthawks give a nasal peent or beer call while flying. When defending a nest, the female gives a hissing or throaty cluck. Courting males give a croaking auk auk auk call.

The Cornell Lab of Ornithology/ http://www.allaboutbirds.com

Posted in Spotlight On Ohio Birds

With the addition of some beautiful overnight snow, my backyard feeders have been particularly busy with all sorts of birds. The Northern Cardinals which prefer either feeding on the ground or platform feeders will perch in a nearby bush before flying onto the ground or the feeder to pick at the food. So I set my  digiscoping rig this afternoon and focused on the bush they perched in. Some of my favorite photographs are of Northern Cardinals with a snowy background. 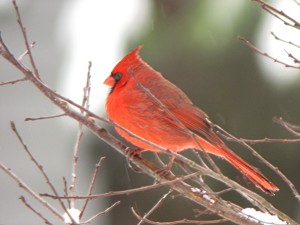 For the past several days, starting on the 26th, a Rufous Hummingbird has been visiting the feeder of area birder Bill Stanley, which is located just outside of Williamsburg Ohio. At first this sighting peaked my interest, but when it showed up yesterday I started to get that twitch again. So this morning after I got home from physical therapy for my knee, I looked up his number in the Cincinnatibirds directory and gave him a call. Speaking with his wife she informed me that indeed the Hummer was still feeding this morning. Asking if it would be alright if I paid their feeder a visit, she informed me that it would be fine.

So why would a Rufous Hummingbird be hangin’ around this part of Ohio in late December? There are any number of reasons for this to be happening. As anyone who feeds birds, especially Hummingbirds know that you should keep your feeders up as long as possible so any migrating Hummingbirds can stop an refuel while on their long journey. Is this an unusual sighting? You bet it is, but we’re seeing more and more of this every year. Just 2 days ago a Rufous was sighted in Ottawa County on Lake Erie. So what’s the fate of this small bird? I hope it leaves and lives a long healthy life. But Mother Nature has a way of handling things and I can only hope for the best.

When I arrived at the Stanley residence Bill welcomed me and we talked about the best way to view the bird. Not wanting to impose I made sure I stayed outside and relatively close to the feeder. As Bill and myself were talking I noticed the Hummer fly by in a patch of tall vegetation 20 feet from the front of the house. After this I found a patio chair and started the waiting game.

It was cold and the breeze started to pick up a little when I knocked on Bill’s door to inform him that I was going to sit my car in a different location so I could have a better view of the feeders, and also to get out of sight so the other birds as well as the Hummer wouldn’t feel threatened. It was 10 minutes later when it showed up and started to feed. 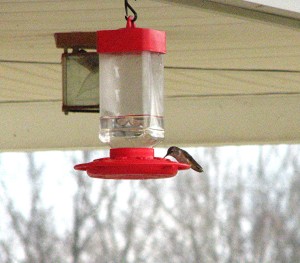 I didn’t take my digiscoping rig thinking that my other Canon camera would be OK. They might not be the best pictures, but I’m happy. 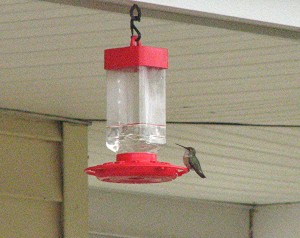 I continued to watch the Rufous Hummingbird for 20 minutes as it flew back and forth between the feeders and some of the nearby trees. It was while it was perched in a tree that I was able to get real good views and make out it’s rufous coloration on it’s flanks. A bird bander was out there either yesterday or the day before trying to get a band on it, but he missed so we won’t know the sex or age. Either way it was a good time with one more bird to the old life list. 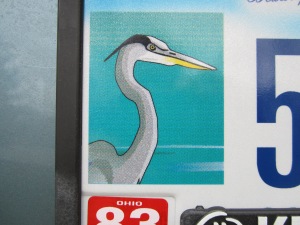 The finishing touches for the new bird-mobile came in the mail the other day, my new Scenic Rivers license plates. And of course it’s fitting that the new plates have a depiction of a bird, a Great Blue Heron no less. Wave if you see me.

Remember what It’s all about.

Merry Christmas from everyone at “A Birder’s Notebook”

Dedicated to the birder, as we start our week.

As we pause, reflect

on this holy Christmas morn