As with the majority of my recent birding trips this one started out with a simple text message to Jonathan. “Hey Jon want to go birding”. Whereupon he’ll reply, “Sounds good, where do you want to go”. After this exchange of simple sentences begins the process of whittling down the details. With a beautiful day in-store we decided on something a little different for the both of us. We’ve both been to Brookville Lake in the past, however this time we wanted to dive in and try to get to know this area a little better than just driving to Treaty Line Road in the Spring for wading birds.

The morning begins with getting up at my normal weekday hour and setting about gathering my gear and getting onto Bing maps and studying the roads in and around the Brookville Lake area. Picking up Jon at 8 am we hit the highway for the long drive.

One of the target species today are Sandhill Cranes. My only experience with these beautiful birds is when I see them fly over. In recent years one of the most reliable places to see them in west of Seymour Indiana in a place called Ewing Bottoms. However this is a bit of a long drive and there have been some sightings of them in the Brookville area, so our choice was pretty easy.

We approached the lake from the south and our first stop is the dam. Walking out onto the dam we sat up our scopes in hopes of seeing anything. Except for a small group of Pied-billed Grebes and a bunch of busy White-throated Sparrows, the dam area wasn’t how we wanted to start the day. Jumping back into the bird-mobile we were off to follow up on the posting that Allan Claybon posted on the Sandhills, which would lead us to Whitewater S.R.A. If you look at a map of the area you’d see that both parks are adjacent to each other, so to get to the mud flats where Alan had seen the birds we have to first go through Whitewater Park. And if you’ve ever birded with Jon and myself in the past you’ll soon realize that we get distracted quite easily and go off the beaten path and forgo our true destination in search of other species.

So as we stopped and birded a certain area, we’d move onto the next. It was at one of these road side stops as we were checking out Evergreens for Crossbills and Siskins we heard Sandhill Cranes calling. Driving to where we heard them call, we pulled off the road and trekked into a field of corn stubble as the Cranes continued to call. After several minutes of trying to get into position we spotted the top of their heads as we counted about 30 cranes. However the view from this spot was awful so studying where we were, we had a good idea that we might be a better view if we left the park and follow this one road to where we might have a view.

And boy did we. In a corn field behind this farm house sits this massive flock. 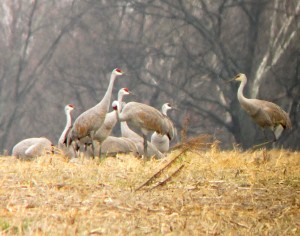 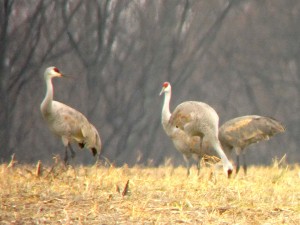 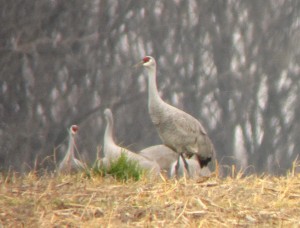 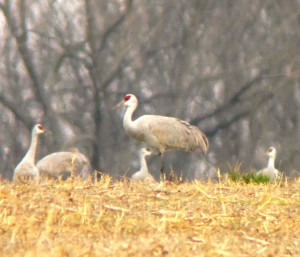 You don’t really realize how one can feel when you see such magnificent birds at close range. We stood there for about 30 minutes as I jockeyed for different angles to get more digiscoped pictures. Just seeing them on the ground feeding like this was a true thrill and if you ever want to set the seed of bird watching in anyone, show them a sight like this.

Not wanting to spend the entire day at this location we reluctantly preceded with our day. We wanted to cover the lake and see what waterfowl had dropped in. Several boat ramps and public beach access area dot the lake and we drove to as many as we had time for We did find one area where we spotted several hundred ducks and geese, and if it wasn’t for this one spot we might have been skunked on any waterfowl for the day.

Constructed in 1968, Brookville Lake is 5,260 acres and 17 miles from north to south, so getting from one vantage point to the other takes some time, and with the shortening of daytime light time is precious. And as the day wore on we finally made our way to the northern end of the lake, just north of the Dunlapsville causeway which traverses the lake from east to west. Water levels were so low that this area was turned into a massive mud flats with small pools of standing water. It was quite a sight. 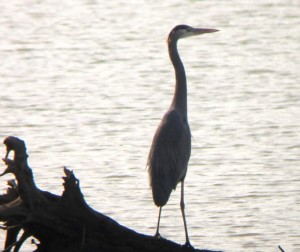 A lone Great Blue Heron in the shade.

However the most impressive display was all the Bald Eagles. At one point we counted 10 either in the sky or perched at one time. One might forget that you’re in Ohio and not Alaska. 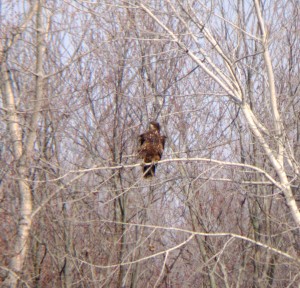 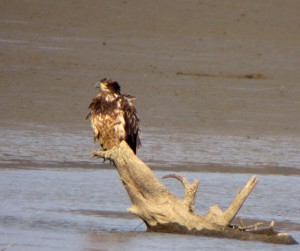 In one of the small pools in the mud flats sat a group of 13 Sandhill Cranes. Viewing them through our scopes it was about this time we heard the “chortle” call of more cranes coming in out of the east. It was the large flock we had seen earlier feeding in the corn field coming to the mud flats. Wave after wave flew overhead as we marveled at the sight of these creatures glide in to join the others. They were everywhere, at least 200 individuals. 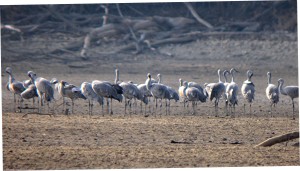 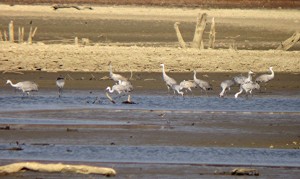 It was truly a great day of birding, and the notable birds for the day include:

This entry was posted in Notes from the Field and tagged Bird Watching, Birding, Brookville Lake, Whitewater State Park. Bookmark the permalink.

2 responses to “Notes From The Field”