As with all skills you learn the more you use these skills the better you’re going to become. And if you don’t use these skills don’t be surprised that sometimes even the simplest task becomes difficult. The same can be said about birding. With everything going on right now the chance to go birding has been rather elusive.

Spring was rather a bust when it comes to shorebirds in this part of Ohio, so Jon and myself were due for an all day shorebird hunt. And it started this last Wednesday when Jon called and wanted to see if I’d join him at the Cincinnati Zoo Wetlands. Migration is in full swing and with nothing better to do that evening I said yes.

Having been there a number of times I’ve usually birded from the side of the road well off the edge so drivers can see me. However with all the vegetation growth it’s no longer feasible to see the water and the mudflats that border the edge. So we walked to higher ground for a better look. 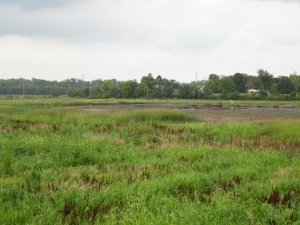 As you can see from these 2 pictures that it’s pretty flat and this rise in the ground offers a look down onto the only body of water with sizable mudflats. And the birds were plentiful.

There were plenty of shorebirds as we started to scan from our high ground. Killdeers were by far the most numerous shorebird, followed by Least Sandpipers. Both Semipalmated Plovers and Sandpipers were present along with Solitary and Pectoral Sandpipers. Throw in a few Lesser Yellowlegs and you get the picture of what we were seeing.

Today however we decided to do a Western Hamilton county trip and hit some of the best spots recently for shorebirds. The funny thing was that no one told the shorebirds to be there as well.

Starting at Lost Bridge and areas in the same vicinity we were pretty much skunked. There was a Lesser Yellowleg here. A Least Sandpiper there. But nothing you could sink your teeth into. The same area that was giving us Buff-breasted and Upland Sandpipers was empty. So we moved to another location, which ended with the same result. So we drove from Lost Bridge, to the Oxbow, then to Shaker Trace Wetlands, then to Listermann’s Brewery for a beer and to come up with a better strategy.

After our thirsts were quenched, we decided to head over to Jon’s house where he would drive his truck over to the Zoo Wetlands again, and I would follow. Even though our thirsts were satisfied, our unquenchable desire for some shorebirds was not. And this time we were coming at the pond from a different angle so we could get the best views possible. And we did.

Some pretty nice close-up looks at a least Sandpiper.

Even though it wasn’t a very hot day, the humidity was wearing us down as the clock approached 5 o’clock. There still will be plenty of opportunities to get out into the field during fall migration, and hopefully it will be sooner than later.