A few days ago I wasn’t giving myself much of a chance of seeing my 100 species for January. Being the eternal pessimist there’s always that place in the back of ones mind that keeps repeating over and over again that, “it’s a lost cause”.   The month is slipping away fast and being back at work from my extended vacation only allows me the weekends to get my birding in. And since this will be the last 3 day weekend due to it being a holiday, I thought I’d better make the best of it.

Yesterday I had 2 target birds in mind as I started the day a little later than I’m used to. A helpful tip from Brian Wulker put me right in the middle of Clifton, specifically Burnett Woods, for a very difficult bird to locate. The Winter Wren. At 4″ in length, this nervous little birds loves to hide in the tangled roots and under growth of the woods. So the technique that I’ve got to implement today is to try and “pish” them out into the open for a quick ID before they scurry back into the under growth.

One of several entrances into Burnett Woods. This one is the Ludlow Avenue entrance, with the nature center off to your right and the small pond directly ahead.

My son David worked her for the parks last Summer and was familiar with the layout of the park and specifically the area in question where Brian saw his Winter Wren. There is a marshy area opposite to where I was coming in from, and that’s where I was heading. There’s a trail that circles the pond so i started on the left side of the pond where the under growth in thicker with Honey Suckle and brush piles, which Winter Wrens love. For 45 minutes or so I made my way around the lake stopping and vocalizing trying to entice a wren to pop it’s head out. It wasn’t until I started to make my way back when I caught a brief glimpse of one flying low to the ground and returning to the base of this tree with a patch of green leaves growing around it’s base. I focused my attention on this spot and started to “pish”. Wren’s find it difficult to resist someone “pishing”, and out it popped. It gave me some great views and a good start to the day. Now onto my next target bird, Rough-legged Hawk.

Now this winter one of the more dependable areas to see Rough-legged Hawks was at the intersection of Whitson and Loomis, which borders CVG (Great Cincinnati, Northern Kentucky International Airport). Not being familiar with this part of the airport I studied a map of the area before setting out. Confident on the location I made my way down the highway to the area in question. As I’m driving the sun comes out, and so does my hope for finding this bird. For some reason big raptors like the sun, and with the warmth of the earth I’m sure it also helps with their lift in flying.

As I pull of the road there is a noticeable gravel pull off where the 2 roads meet. Plus there is a service road that extends from the gravel pull-off towards an under-pass towards the airport. So as I pull off the road and stop I immediately notice a large raptor flying and hunting just over the wire fence directly in front of me. Sure enough it my Rough-legged Hawk. This is almost too easy, as I exited my car to get a better look as it started to hover slightly. It wasn’t till I exited my car when I noticed a small group of large birds fly out of this drainage ditch that runs parallel to the service road. Much to my surprise it was 8 Short-eared Owls. EIGHT! It seems they were feeding on something in the ditch, and as I watched in amazement one came back and set down. Not wanting to have a photographic opportunity like this pass me by, I positioned my car at an angle from the owl so I could get out without spooking it by hiding behind the door, and also get to the back hatch so I can get my scope and camera out. 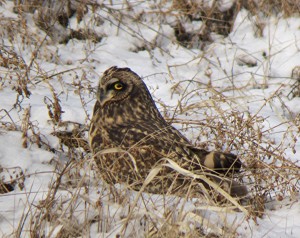 This is the large field that the remaining 7 Short-eared Owls circled around after I accidentally spooked them.

Now my total for January stands at 98. Now I’m feeling a little more positive on making 100 species. So where to next? Armleder Park and try once again to get the great Horned Owl that always hangs out there. As I start to pull away the CVG Police pull up wondering what I’m doing here, especially taking pictures. She was a real nice lady, and after explaining to her what I was doing and after showing her the pictures I took. And to add some credibility to my story I pointed out all the owls that were circling the field just behind her. Even though the gravel pull off wasn’t posted, I guess I was just too close for them, and she reminded me that I shouldn’t bird here in the future.

Passing the muster that I wasn’t a bomb-totin’ terrorist I made my way back over the river to the sanctuary of Ohio, and Armleder Park. After I parked my car it was a short 10 minute walk back to the woods where the GHOW likes to roost. But not today. So I’m still hangin’ at 98 birds when I large flock of ducks fly over head. I was standing at the edge of the woods near the bean field as I scanned up and saw my next bird that would bring my count to 99 birds, a Northern Pintail.

So now my focus is on just 1 bird. And it’s a Great Horned Owl. So after leaving Armleder Park, I head up the Little Miami valley to check out areas where they might be found, plus some of the gravel quarries and lakes to see how much ice has formed over the past few days.

One of my stops was Camp Dennison Nature Trail where I did spook an owl, but I never got a good look at it to determine if it was a Great Horned, or Barred. At lake Isabella the nesting can was still empty, where in years past this was a slam dunk for nesting Great Horned Owls.

So I made it home with needing only 1 more bird for January and tomorrow to get it. So my plan is to get up early once again and head towards Fernald and the stand of Evergreens that always houses owls. And if I’m successful, then the rest is just icing.

This entry was posted in Notes from the Field. Bookmark the permalink.

2 responses to “Notes From The Field”