Yesterday morning was a little better as I once again pulled on my long underwear and heavy clothes to brave the elements. Local birding extraordinaire Brian Wulker, who I birded with the other day, located a small flock of Snow Buntings, Lapland Longspurs, and Horned Larks. Needing the Longspurs for my January 100 List, and having a opportunity to finally get some photos of Snow Buntings, I made the hour long drive to the western side of Hamilton County. The location is a local hotspot with a wide open field that overlooks a large gravel pit. Anyone who birds in the area knows of the Whitewater Township Senior Center, and that’s where our small flock of Winter specialties are hangin’ out.

With still below zero temperatures and a slight breeze I really had to bundle up as I started to scan the area. Brian had messaged me telling me that he threw some cracked corn for them to feed on which should last for a couple of days, so start there. I saw where he had thrown the seed but no birds. I drove around the back of the senior center and scanned the large field. There they are! 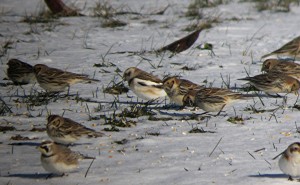 In this shot you can see all 3 species of birds. 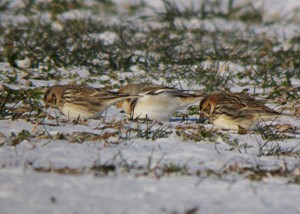 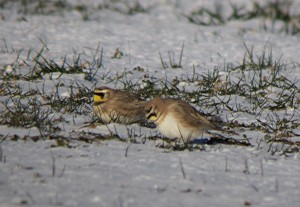 A beautiful pair of Horned Larks 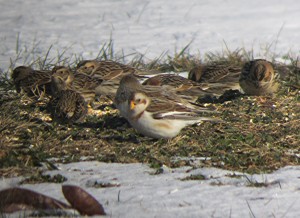 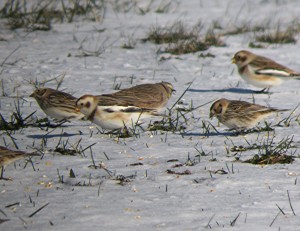 You have to admit they Snow Buntings are one of the most “cutiest” birds. 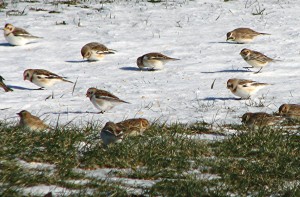 Another shot where all 3 species are seen together.

After watching them move about this large area feeding from one spot to the next for about 90 minutes, I made my way over Phil’s to pick up a much needed Eastern Towhee for my January count.

It’s minus 5 degrees below zero outside, with a wind chill in the minus 20+ degrees. School systems all over the state are closed due to this blast of arctic air. So what a great time to go birding.  And not just any birding mind you, cold weather birding which is a different animal altogether. We’re not grabbin’ our bins and flying out the door. No, we have to put some thought into this madness. But this is a life bird, and it’s really, really close to home this time. A Glaucous Gull is a good bird for me to chase, so I pulled on my long underwear and headed out to where it was first sighted, Sunsite Lake.

This small lake is right next to the Great Miami River, with East River Road bisecting both. A large flock of geese and gulls were on the river which I scanned as soon as I got there in spite of the fact the gull was located elsewhere. No Gull on the river. Move down to the lake and scan there. No Glaucous Gull there, only a few Herring Gulls and a couple dozen Ring-billed Gulls.

Back to the river where I meet another birder looking for the same bird. He scans and sees nothing. We talk a little and he tells me he’s waiting for a friend to show up. As the cold was getting unbearable we went into our respective cars to warm up. While in my car I’m still looking at various gulls coming in to land. After several minutes of this I notice one gull that didn’t have the black primaries like all the other gulls. Both Herring and Ring-billed Gulls have black primary feathers, however this bird didn’t despite the brief glimpse. I pulled on my hat and gloves and grabbed my bins for a quick look. The wind was coming off the river right into your face. It was horrible. I scanned the flock of gulls on the opposite side of the river and notice one gull bathing. No black primaries. Glaucous Gull. I race back to grab my scope and camera, and to tell the other birder it was here. We both settle in on it as his friend pulls up. We all three get good looks at it, regardless of the bad photo I took. 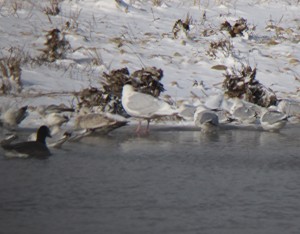 And believe it or not this road I was on also produced Snow Buntings, and a Fox Sparrow. And on the drive home I picked up a Horned Lark by the side of the road. So my new January 100 Species counts is”

Saturday was so beautiful in the Ohio Valley with bright blue sky and intense sunlight that the glare was almost too much as Jon and myself were trying to make out a lone Greater White-fronted Goose out of the thousands of Canadian Geese at Grand Valley. Unlike today which is so cold I’m debating not chasing the Glaucous Gull sighted near Dayton. But that’s another story.

Jon sent me a message Friday evening asking if I was going out on Saturday. He had said that he was joining up with a group that was doing the East Fork State Park Christmas Count, so this came as a nice surprise. So I meet at his house at 7:30 in the morning and hit the road. Today we were going to cover pretty much the same ground we surveyed during the Christmas count we did just a week earlier. Turnover in  the Little Miami River Valley is a constant during the Winter and both a White-winged Scoter and Greater White-fronted Goose were both seen just the day before.

Grand valley was the first place that we went to in hopes of adding the two aforementioned birds and any more that I needed for my January count. 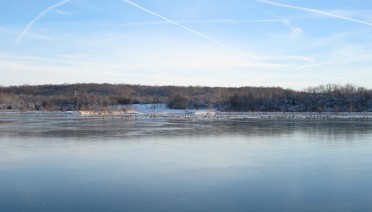 All those little specks are either Canadian Geese of other species of ducks. An amongst all of these is one GWFG.

We set up our scopes and we both started on either end of the flock and started the pain staking task of scanning all the geese (who for the majority were still asleep with their heads tucked) for this one goose. And while doing this trying to pick up a Scoter with all the other diving ducks, which were quite a few as well.

It wasn’t till we meet up with another birder friend who told use that he saw the goose from the top of the hill overlooking the flock. So after exhausting any hope of seeing from lake level, we were off to an area outside the gate that gives a great view of this part of the lake. So we set up again and started to scan. Then the geese got agitated, as small groups started to take off. It was Jon who said the GWFG was up. I tried desperately trying to get my bins on it, until I finally saw it as it flew away. A really good bird for around here.

The rest of the day was spent traveling around hitting all the hot spots. Gravel pits, private lakes, and parks. It was at one such small lake that we got lucky again with both Tundra Swan and Snow Goose. 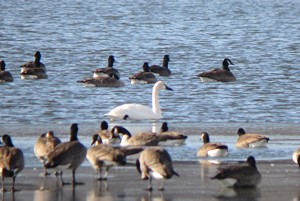 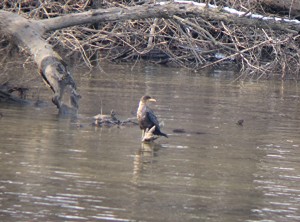 Even though their numbers are greatly reduced during the Winter, Double-creasted Cormorants can still be found. This one was at a marina down near where the Little Miami and Ohio River meet.

We added significant numbers to our day count as well to my January list. Some very common birds are still needed and with any luck I’ll be able to pick them up without too much effort. Will I make 100 species? I hope so.

Total so far is 66 species.

Only an idiot…or birder would be out on a day like yesterday. Being on vacation I especially felt sorry for the people who had to battle the traffic to get to work. My intentions yesterday as I was looking out upon this Winter wonderland was still up in the air. Do I go out, or don’t I?

The I noticed that Brian Wulker who just “liked” my Red-shouldered Hawk photo was still on-line. So I Facebook messaged him to see if he was going out. He was, so we hooked up at 10:00 a.m. at Camp Dennison Nature Trail. The plan for the day was to hit the Little Miami River Valley, like we did for the Christmas Bird Count.

So while the snow continued to come down at a good clip we did a good bit of driving hitting some of the hot spots through the area. Besides Camp Dennison Nature Trail, we peered down into Grand Valley Preserve from the edge (since neither of us have passes), a few gravel pits along Roundbottom Road, Avoca Park, and Bass Island. However my thoughts were always on Lost Bridge and the Trumpeter and Tundra Swans that were there yesterday and the day before.

So around 12:30 we went our separate ways, with myself making the long haul all the way to the other side of town to Lost Bridge. And just like the day before the Swans were still there. 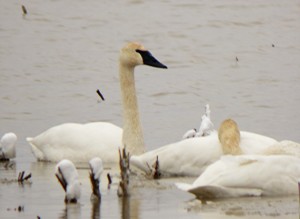 This now gives me a grand total of 41 species, and a long way to go.

Nothing can hinder a birder more than bad weather. And right now were having some snow pile up which makes getting to where I need to go difficult. It’s not that I don’t know how to drive in the snow, it’s all the other people. The morning rush hour will extent well into the late morning, so I’m sticking close to home this morning and wait it out.

In the mean time as I looked out the back door I had a nice surprise. 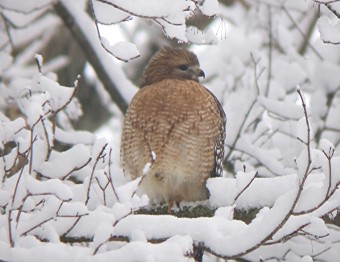 Happy New Year to all, and come with me once again on this most stressful journey to tick off 100 different species of birds. For a lot of people here in Ohio they concentrate on just Ohio birds. And that’s alright with me considering that most of the big birders in the state live within a relatively short drive to Lake Erie and all the great birds there.

Now living in Southwestern Ohio, and in close proximity to both Kentucky and Indiana I can’t help but bird in these 2 states as well. Now some my call that cheating, and others might not care at all. For myself it’s using ones resources to gather in as many birds as possible in a part of the country where finding 100 species can prove very difficult. This is birding on a budget where I can’t take off to the lake on a whim to chase down the latest rarity. I need to be frugal with both my money and time and fuel.

Last year was a banner year and I made my 100 species in just the nick of time. This year however might prove to be harder with the “Finch Report” from up North not being in our favor like last year. So I will try my best and work real hard to bring in the 100 species.

So to start out since today is the 1st of January is the birds observed at either my feeder or on this short drive to the store this afternoon.