days are drifting away and I’m still far away from my goal. However I did score 4 more birds today to bring my total to 87 for the month.

Note the short bill and neck on this Cackling Goose photographed through a chain-link fence and from quite a distance.

One of 6 Tundra on Lodge Pond at Fernald Preserve.

As the month starts to wane, I have to kick it into high gear and try to spot as many species as possible before the month is out. Today I ran around to some of the larger bodies of water and pick up as many waterfowl as possible, but as luck would have it so many of them are frozen over. Despite these setbacks I was still able to come away with a few more birds to add to this months list.

After today the total is 83 species.

After adding up some more species that was collected on my last day in Florida and on the drive home, this is the complete list to date.

A Sparrow Kind Of Day

Kathy and I took a side trip today to visit Fort Pickens, a Civil War era fort that was built to guard the entrance to Pensacola Bay. It also in the past been one of the spots where White-winged Delves have been seen. So it was a win, win for me since I do love Civil War history, plus an opportunity to tick off a life bird.
The drive down Santa Rosa Island west out of the small town of Navarre was something to behold. It was Florida in the raw. Kind of what you might imagine it was as Spanish explorers first set foot here. Pristine white sand beaches with no buildings or houses. Being a National Seashore really helps as well.
We had a wonderful time at the fort, however not one dove was seen. Not even the more common ones lime Mourning or Eurasian. However I did make it up with the addition of 3 sparrow species.
55. Chipping Sparrow
56. Savannah Sparrow
57. Vesper Sparrow
58. Ring-necked Duck

Since arriving to the Sunshine State on Saturday there seems to be a vital component missing, the sun. The sun has not come once since our arrival. Despite all the gloomy weather I ventured out to walkway 5hat leads to the beach and set up my spotting scope and started to scan. The fog wasn’t nearly as bad as yesterday so I was able to view the ocean to the horizon. What I really wanted was to get was a better view of a Northern Gannet. It was after about 30 minutes when saw my first one, an adult, and I was able to get on it quickly as it flew parallel to the coast from my left to right. Now I’m satisfied, but why stow my scope away and head back. No need at all, so I stayed put and continued scanning.

I had another Gannet fly by, a few Mergansers, and loads of Common Loons were quite numerous. Then I noticed what I originally thought was a juvenile Gannet fly even closer to shore than the other Gannets, but when it passed I immediately noticed something different. This bird had a broad white collar which didn’t match what I was looking at in my field guide. In my Peterson guide I had the page open to where the Gannet info was and just below it was the picture of a Masked Booby. That was it!  I was absolutely floored. Never in a million years would I imagine a bird like this come across my scope.

I’m going to include a photo I took off the internet with this post so you can get an idea exactly what I saw. Notice the white collar. That’s exactly what I was looking at as the bird disappeared from view. 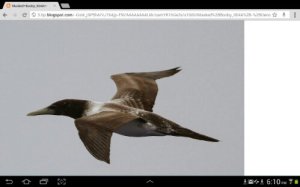 January 100 Species Update from “On The Road”

Considering the kind of weather I left behind in Ohio, you would think I wouldn’t complain about 60 degree temps. And believe me I’m really grateful of the warmer weather, however one of the things I was going to do today was set up my spotting scope on the walkway that leads to the beach and scan the ocean for all those fly by birds, especially Northern Gannets. I really wanted a better view of this particular species than what I had yesterday. But there is one thing that you should never depend on when birding is concerned, and that’s the weather. And what I had to deal with today was fog which played pretty thick on the ocean. Other than a nice raft of Red-breasted Mergansers, I couldn’t really see anything further out than a few hundred yards. So I packed it in and headed off to my new favorite spot on Okaloosa Island. The 15 minute drive was uneventful and after making a U-turn after crossing the bridge, I swung the bird-mobile into a close spot and gathered my gear for the walk to the beach. By then the fog really came in, so much so you couldn’t see the bridge which was 50 yards away. If you remember my post from when I visited back in September, this is a protected area for nesting birds, especially the Snowy Plover. So the majority of the area, which is Air Force property, is roped off to trespassers. So what you end doing is walk the edge and keep your eyes and ears open. For the next 3 hours I had so much fun birding I didn’t want it to end. Top quality birds was the key today, and some of these birds were such a surprise even for me. 37.  Ruby-crowned Kinglet 38.  Osprey 39.  American Bittern 40.  Swamp Sparrow 41.  Nelson’s Saltmarsh Sparrow 42.  Eastern Phoebe 43.  Royal Tern 44.  Snowy Plover 45.  Red-breasted Merganser 46.  Bufflehead 47.  Ruddy Turnstone 48.  American Coot 49.  Herring Gull 50.  Great Blue Heron 51.  Sedge Wren 52.  Pied-billed Grebe