Yesterday morning bright and early I arose, and after my customary morning rituals I drove over to Jon’s to pick him up, for we were to participate in a Christmas Bird Count. The kicking off point was Shawnee Lookout Park in far western Hamilton County. Roughly 24 birders under bright blue skies and temps hovering in the upper 20’s ventured forth to their designated areas till we meet up again at noon in Aurora Indiana.

The history of the Christmas Bird Count goes back a long way. Specifically Christmas Day 1900. It was on that day that ornithologist Frank M. Chapman proposed a new holiday tradition, a “Christmas Bird Census”. You see prior to the first Christmas Bird Count what people did in the name of “tradition” was what they called a Christmas “Side Hunt”. The group of individuals would choose sides, and go into the field an killed both bird or mammal, and at the end tally up all the dead animals to see who won. It was through Frank Chapman’s inspiration that 27 birders conducted 25 Christmas Bird Counts that year. From Toronto to Pacific Grove California they tallied 90 species when they combined their counts.

So it was myself and Jon with fellow birder Brian Wulker (birding ace) drove to our area that needed to be covered. Lawrenceburg and Aurora Indiana are river towns however between the river and the two towns lie flood plains, agricultural fields, power plants, gravel quarries and small businesses. A bike path transects the whole thing and the logical place to start. We knew of some open fields that ran along the bike path which would be good habitat for all different species, we thought.

That’s Brian in the blaze orange hat and a cut off Jon, with the bike path leading away. 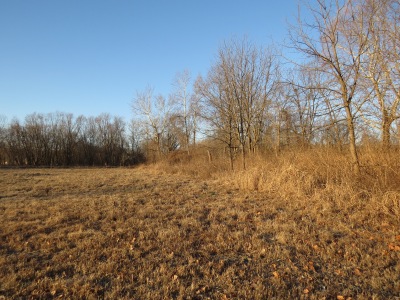 It’s always nice to run across one of my favorite birds, Rusty Blackbird. 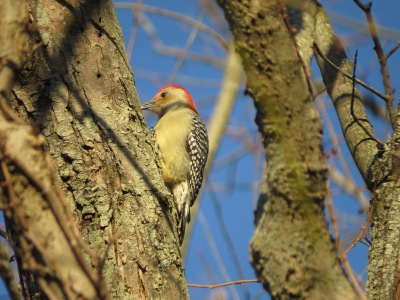 as were Red-bellied Woodpeckers.

The vegetation grew thicker as the field held several ponds. The perfect habitat for sparrows. Mostly Swamp, Song and Tree Sparrows were found. 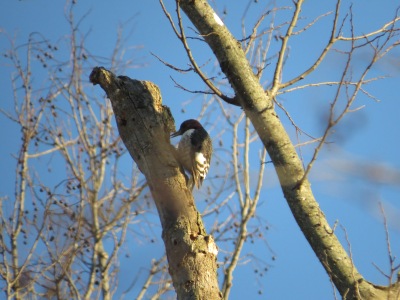 A real surprise was this Red-headed Woodpecker who was aggressively keeping at bay the other woodpecker species that came too close.

It was a tough day of birding. If it wasn’t for a few Mallards an some Canadian Geese, waterfowl would have been a total bust. Jon and myself split up with Brian after we returned to the cars and explored a few other areas separately before gathering back with the main group at a local brewery in Aurora.

I’m not positive on the total number of species seen, I’ll be getting a eBird list from Brian in a couple of days, however I try to use my stellar memory to recall what was seen.

As you can see it was lacking in bird species. And you know that’s how it goes sometimes. But what’s really bothersome after looking back on the day was the lack of waterfowl on both the Ohio River and the ponds we came across. If the weather doesn’t change and start freezing things over up north, the southern push of ducks will greatly influence my January 100 Species Challenge. Without good numbers of waterfowl I’ll never make 100.

So ends another CBC, an hopefully if it’s not too busy next season I’ll participate in one next year. Everyone have a Merry Christmas and a Happy New Year.