While at Caesar Creek State Park yesterday I was scanning the lake from various locations to see if any waterfowl was starting to show up. For the most part all the action was centered around all the Bonaparte’s Gulls as they hovered over the lake as Common Loons stirred up all the little bait fish.

My last stop was a boat ramp and what caught my eye were all the American Pipits feeding along the edge. I was able to pull close with my car and snap off a few pretty nice shots.

I’ve been sick off and on since Christmas. For the most part it’s been just a head cold, but it seems that as soon as this one clears up, another one takes over. Then to top it off I got bronchitis. With my medical history getting bronchitis is something I don’t get over quickly.

Today the sun came out and the temps shot up to a balmy 45 degrees and i decided I need to get out and do a little birding. I drove to both Caesar Creek and Cowan Lake State Parks to check out the water fowl. And much to my surprise I found good numbers and varieties.

One of my usual stops is Harveysburg Road, but do to the awful winds we’ve been having the road was blocked by a fallen tree.

The ice was breaking up which left some nice pockets of open water for the ducks to congregate in. For the most part the Gulls kept either to the beach area (which was under water due to all the rain) or out on the ice roosting.

I was able to pick out a lone female White-winged Scoter which was the bird of the day, but what really impressed me were the Common Goldeneyes which were doing their courtship display. It would have been nice to get some photos of the birds but they were so far away any pictures we’re out of the question.

But it was while I was at Cowan Lake I noticed a lone Horned Grebe fairly close to shore. They were actively feeding on small fish and I couldn’t help but be mesmerized by the Grebe. I must have watched for an hour as I jockeyed for a better position to get a good photo. 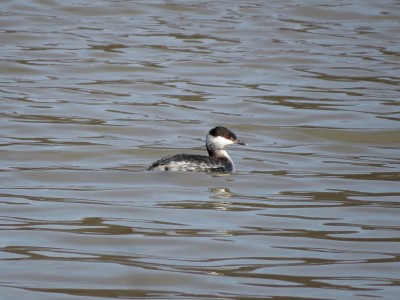 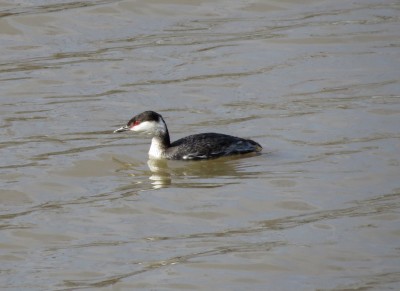 Caesar Creek State Park can run either hot, or cold for me. I’ve been making regular visits recently with birding really starting to pick up with the arrival of more ducks to the lake. As for the regular gull population, it’s been the normal Ring-bill, Herring, and Bonaparte’s Gulls. That was until 2 days ago when a friend of mine Rick A. (who has a knack for finding rarities) sighted a ABA code 3 Little Gull at Furnas Shores boat ramp. This sighting was later confirmed by several other birders as more and more people drove to Caesar Creek to see for themselves.

Little Gull (Larus minutus) are usually reported from the northern part of Ohio along Lake Erie. They’re normally seen with Bonaparte’s Gulls which are slightly larger and very similar. Field markings can be very confusing, especially from a distance if they’re resting on the water. It’s when they’re flying that they really stand out from the Bonaparte’s Gull. They’re underwings are almost blackish in color which really leaps out at you as you observe them in flight. And if they’re flying with Bonaparte’s Gulls you’ll then notice the smaller size difference.

Even though this wasn’t a “Life Bird”, I was still anxious when the first report came across Facebook’s “Ohio Chase Birds” page. However with it being the holidays and packages still be delivered, I needed to stay home to make sure “Porch Pirates” didn’t make off with them.

Late afternoon yesterday was the only time available for me to chase the bird. By the time I finally got a look at the bird, or should I say 2 Little Gulls, it was about 2:30 pm. We were losing precious light, and with thick cloud cover trying to capture anything flying with such a slow shutter speed was really difficult.

As I joined the group of birders, one of them stated that there were 2 of them. Having 1 of these birds is unusual, but 2! Indeed it was 2 as I got on both birds. What a delight. I attempted to take plenty of pictures, however with the terrible lighting conditions, distance from the bird, and slow shutter speed and my auto focus trying to sharpen a moving bird, what pictures I got were mostly for diagnostic purposes. 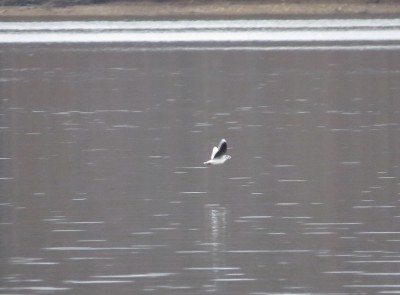 What I like about the above photo is the difference between the Little Gull on the left, and the Bonaparte’s Gulls on the right. 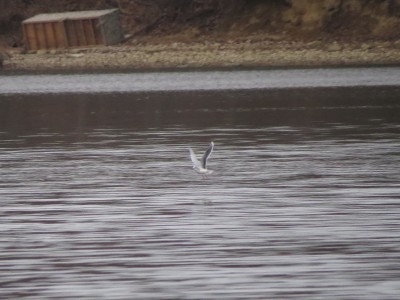 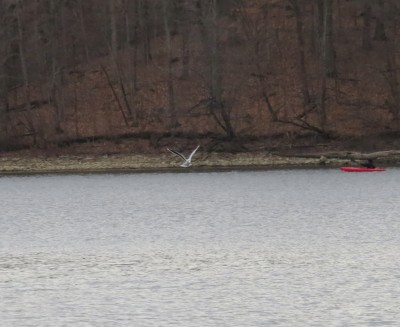 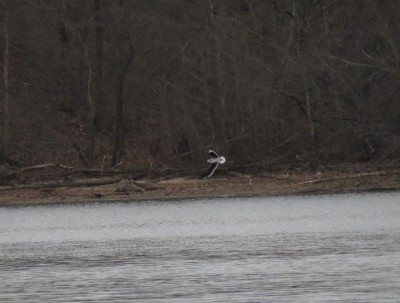 There are 3 species of North American Scoters, the Black, Surf, and White-winged. For us in Ohio they can be a common bird seen mostly on Lake Erie. They do wander south of the lake but with usually with irregularity. Last year for instance during my January 100 Species Challenge I was able to tick off both Surf and Black Scoters at a Metropark in Dayton. And towards the end of this year the northern half of the state is seeing the most of the 3 Scoter species.

However the day before Thanksgiving I noticed a small sighting post on our local bird watching Facebook page of a Black Scoter at the beach at Caesar Creek State Park. This really peaked my interest since Black Scoters are the rarest of the 3 in my opinion. But with the holiday staring me in the face with those last minute preparations I was unable to chase this bird till yesterday.

My first stop however was Cowan Lake State Park to check out the reports of a pretty reliable Long-tailed Duck that was seen on some sediment settling ponds that were being used for all the dredging that’s going on at the lake. I dipped on the duck and later found out that it was scared off by a Bald Eagle and never came back.

So after Cowan Lake I made my way of to Caesar Creek and hope for better luck. I parked my car and approached the south half of the beach. After 100 yards I set up my scope and started to scan. Nothing as I scanned from the north to the south. The sun was still rising and the glare on the water really burned to retinas. A I continued to scan towards the new marina I saw one lone bird on the water.

This really couldn’t be the Black Scoter, could it?

As I moved closer to the lake with a better angle out of the sun I was able to get my scope on the bird. And indeed it was a Black Scoter.

I stayed with the bird for about 50 minutes as it moved the length of the beach, and me trying to get a closer photo. Despite all my efforts this distant shot was all I could get of what I think is a great bird.

The beauty of retirement is revealing itself as I start to take advantage of some of my favorite pastimes, like birding anytime I want.

I drove to Caesar Creek State Park to check the beach and the local gull flock to see if anything might show up a little unusual. To my surprise the beach was void of any gulls. They were all roosting on a temporary dock located a couple hundred yards off the beach. So I started to scan the beach and pick through all the Killdeers when I noticed 1 lone “Peep”. This one bird had my total focus for about 30 minutes as I positioned myself against the glare of the rising sun.

It may be only a Least Sandpiper, but the fact that it was all alone on this near empty beach drew me to it. I took dozens of photos, but I choose this one because of the way the sun hits it, and the contrast between the bird and the green stuff it was feeding in.

Posted in Notes from the Field, Photo Journal

Quite Possibly The Cutest Sandpiper

First things first before I get to my blog post about cute sandpipers, I’m finally retired. After 40 years as a Surgical Technician at the same health care facility I’ve punched out for my last time. Which in turn should free me up more birding, and chasing rarities. So hopefully I won’t be so lazy lately in getting blog posts out to all my readers.

So when you think of cute Sandpipers there’s quite a few that come to mind. But first let’s make sure we’re on the same page when it comes to Sandpipers. There’s a lot of cute birds that scurry about along everyone’s favorite beach or lake front. So let’s omit some of these.

This little cutey is a Snowy Plover which I found at Gulf Island National Seashore. Now you have to admit that is this one cute bird, however it’s a Plover.

The same holds true to this gorgeous with loads of cuteness to boot. 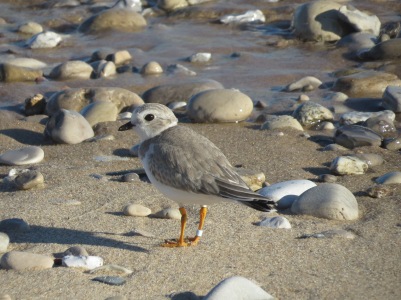 This Piping Plover was photographed at Sleeping Bear Dunes, and the cuteness, and rarity factor is definitely there, but once again it’s a Plover.

Now here’s a picture of a legit Sandpiper, a Purple Sandpiper seen back in  2013 at East Fork State Park. Now this is a great bird, however when it comes to being a cute Sandpiper, ………..well?

Now this heavily cropped and terrible photo is of a Stilt Sandpiper. A reasonably cute Sandpiper in it’s own right, but once again there are cuter Sandpipers out there. 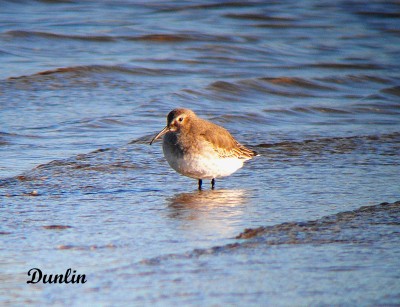 Now this Dunlin is a Sandpiper even though it doesn’t have Sandpiper attached to it’s name. And it’s a plump very cute bird with a lot going for it. But alas not the cutest. 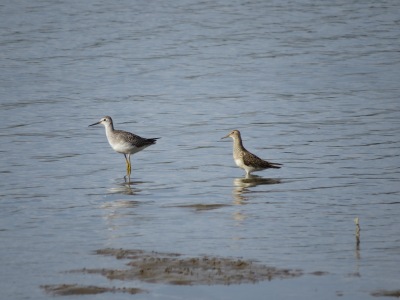 Now this Pectoral Sandpiper and Lesser Yellowleg are very cool, and quite honestly they are cute, but not enough to be called the cutest.

Now breaking into the top 5 of cute Sandpipers is this Semipalmated Sandpiper seen the same day as the above photo of the Piping Plover. This is one cute bird, and his next of kin is also very cute. 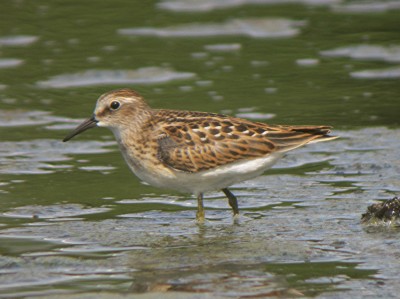 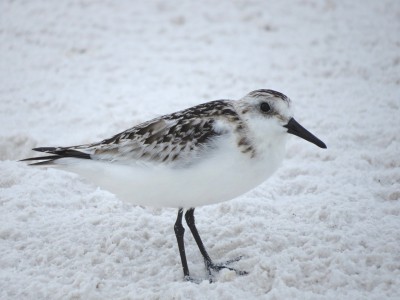 Seen along both coasts and the Gulf of Mexico, the Sanderling is everyone’s little darling of the beach as they search for food as the waves crash ashore. Always on the move, they can be approached if your quick enough, and getting a decent photo on these fast moving bird is always a challenge. And I would have to agree with most people in saying this is a really cute bird.

But there’s one more.

The Buff-breasted Sandpiper, is quite honestly the cutest Sandpiper.

This gorgeous bird was first reported at Caesar Creek State Park this last Saturday, and stuck around through the evening. Very rare except during migration, I couldn’t wait on this bird any longer. So on Sunday after I went birding with Jon, and we saw yet another Buff-breasted at Lost Bridge, I raced up to Caesar Creek to look for that one.

The day was sunny, with the sun hitting the bird at the right angle. the beach was busy with people on this beautiful Sunday, but the Buff-breasted wasn’t bothered and busily feed along the shore. 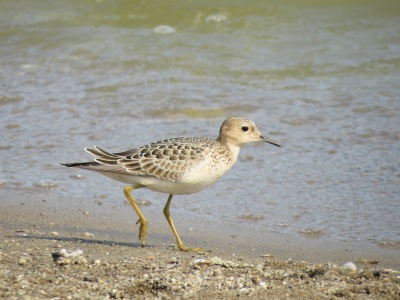 To me they appear as small and fragile bird, with a small head with that beautiful coloration. Very distinct markings on the back with those nice yellow legs.

All told I took over 120 photos of this bird. But when you’re the cutest Sandpiper you don’t spare the SD card.