Notes From The Field/ New Lifer

Yesterday evening while my wife and I were visiting a local Cincinnati brewery with another couple, my Belgian Quad consumption was interrupted by my birding associate Jon with a text.

Next is how our conversation went.

Jon: I would love to but not unless Samantha (wife) changes her mind. I’d like to be out there at dawn.       We’ll see.      Check the Cincinnati birders Facebook page- there’s photos.

Les: Saw the picture. This is worth chasing

Les: Let me know. I’m willing to run after it

Jon: I’m working on it…probably meet you out there early if I can get the necessary approval here.             I’d bring Phoebe (child) as part of my negotiations.

Les: Kathy (my wife) said go, so I’m leaving early and try to be there by dawn.

So as you can see this is how our conversation went last evening. And yes Jon, Phoebe and myself were able to tick off King Eider as another lifer. This is the 2nd sighting of a King Eider in Ohio this year. Just a few weeks ago another one was sighted on Lake Erie, so seeing this one on the Ohio River is very exciting for all area birders.

The weather conditions on the river were very foggy, and getting sharp clear photos this morning was next to impossible. Granted I could have waited around for a few more hours, however I have stuff to get done today.

I was really looking forward to going birding this Sunday because finally I was able to get Jon and John together, and as a group go over some of the details for our Michigan birding adventure for this upcoming Winter. We can blame Hurricane Sandy for throwing a monkey wrench into the works and cancelling John’s flight on Monday so he had to depart on Sunday. We are closer to finalizing the trip, just a few loose ends that need to be taken care, and no better way to do that than do a little birding. Oh well, there’s always next time.

The plan was to meet over at the Jungle Jim’s at Eastgate and then drive together to Mehldahl Dam. Never having been there before I was kind of anxious to see what the place was like. According to Jon the area surrounding from the dam can be either very busy, or a bust.

The drive over was looooooooong, I can see why not too many people bird over here. Don’t take this the wrong way, it’s just that there’s not too many fast ways to get here. It was a very nice drive, and the company was enjoyable, however…

Savannah Sparrows and Bluebirds and a lone Red-headed Woodpecker greeted us as we entered the complex. After gathering our gear and walking towards a rise that overlooked the dam on the upstream side, we set up our scopes and started to scan the area. Not too many birds out into the river, however there were quite a few gull species and D.C. Cormorants, and a few smaller size duck shaped birds on the Kentucky bank.

The morning was bright as the Sun burned off the last of the morning fog and with just a bit of a haze as you looked towards Kentucky I caught sight of a large gull with a black back. Getting Jon on the bird we studied it for several minutes, referring to the field guide just to make sure what we were looking at was exactly what we were looking at. Conclusion, Lesser Black-back Gull. A very nice bird for Kentucky. The longer we stood there more and more birds started to catch our eye. Soon a group of Horned Grebes of 3 or 4 were spotted and with it was a larger bird, much like a Grebe, but not like a Loon. Red-throated Grebe. Another very nice bird for Kentucky. I’m beginning to like this Mehldahl Dam after all, and the drive might be worth it if we keep seeing great birds like this.

Crooked Run Nature Preserve was our next stop, and being only a few miles down the road it was worth not passing it up. There really wasn’t too much on the river and the trail that lead through a large grassy area with a small pond yielded a ton of Field, Swamp and Song Sparrows.

As the morning wore on our last stop was East Fork State Park. Neither of us are very familiar with the park and for myself the only time I was there for birding, I was at the beach. So finding other venues to scope out the lake, other than the beach was pretty futile so we stuck with the beach. 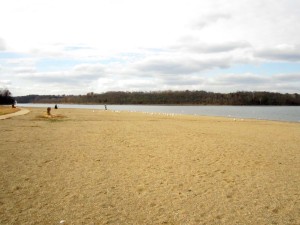 Lots of Gulls, and hardly a breeze to kick up the lake. And speaking of Gulls, Gulls can be pretty tricky when it comes to making a good ID. You see it takes several years for a Gull to mature into what you may see in a typical field guide. And trying to determine what type of Gull you’re looking at when it’s not an adult can be a daunting task trying the patience of many a good birder. Such was the case as we pulled in an set our sights on a rather darkish Gull. Even after it landed it took a few minutes to make the proper ID. 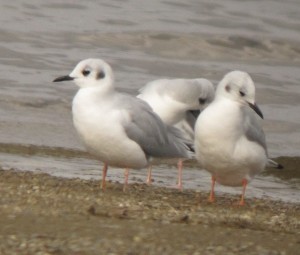 And there were plenty of Bonaparte’s Gulls to go around.

East Fork didn’t have as many birds as we had hoped for. We did spend our time doing a lot of scanning of the water in hopes of anything unusual. Not being as familiar with the lake and the surrounding roads we were at a bit of a disadvantage. It would have been nice to do a little bit of exploring to get a better lay of the lake, but alas that will have to wait till another time.

It was a swell day of birding with Jon and Jason, and I apologize again Jason for calling you Justin. I’m blaming the time change for screwing up my internal clock. And to top it off Jason came away with I think 2 life birds. Sweet!

Notable birds for the day include