For a number of years now, at least since I’ve started taking pictures of birds, the American Kestrel has been one of those birds I’ve not had a lot of luck with. The smallest of the North Americas falcon species I see them all the time. Around where I live you’ll see them on electrical lines overlooking farm land. Now it’s one thing to see them from the quiet confines of your car, and it’s another to sneak up on foot to get a picture. They typically fly away if anyone gets close.

Today I was visiting Fernald Preserve to check out the ponds for waterfowl. And while I was driving through the preserve I noticed a American kestrel teed up on a small tree with the sun hitting it almost perfectly. So I pulled my car over and crept closer trying to get a good angle on the Kestrel. Now if I was on foot I never would have been able to get close, but being in a car awarded me with some really good looks. 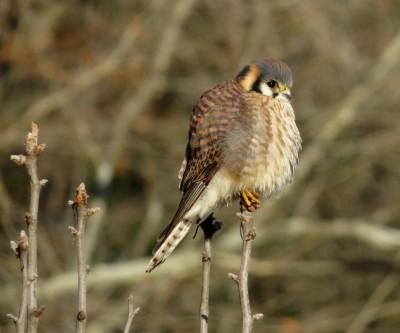 Posted in Notes from the Field, Photo Journal

Just like it is when the Bobolinks return to Voice of America Park every spring as I talked about in my last blog post, this is also the time for the Dickcissels (Spiza americana) to make it’s annual return to Fernald Preserve. The beauty of Fernald Preserve isn’t it’s past as a uranium enrichment facility, it’s the fact that they’ll never built a soccer field or any other sports field or home development on the property. Which in turn leaves it for our breeding grassland birds, like the Dickcissel.

Very vocal this time of year they’re easily seen sometimes as they perch near the top of vegetation. As in years past they can be seen, but usually from a distance which can make getting a photo difficult as the results can be really grainy.

This year I was a little luckier as both female and males were more cooperative with people being close by. 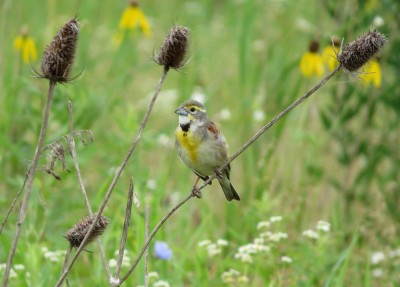 The female Dickcissels seemed to tolerate us humans better than the males and they got particularly close. I’m really pleased with this photo. 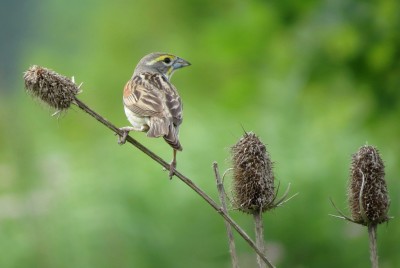 How long has it been since I was out birding? It seems like forever, but after a quick text to Jon arrangements were made an we were on our way despite the very hot and humid conditions that seem to settle over the Ohio Valley during the summer. It can be difficult to get motivated during these dog days to get out a do a little birding during the morning hours before the heat turns up, and this was our plan for the day, and Butler County was our choice for birds. Our first stop was Fernald Preserve.

We arrived early and started out scoping out Lodge Pond for any water fowl. The normal cast of characters were their, the resident Mute Swan, Wood Ducks with additional family members in tow, a lone American Coot and one Mallard. Not a great start to the day, but not unexpected. However not wanting to give up so soon we started to work the preserve and came away with some good birds.

A Yellow-throated Warbler working the Evergreens that line the entry road into Fernald Preserve.

Another very common warbler during the summer months in pretty much all grassy habitats in Ohio, and I’m sure elsewhere, the Common Yellowthroat.

As Jon and I hike back towards a wooded section of Fernald Preserve we spooked up 2 Green Herons that were hiding in this pond with heavy brush along the edge. This one landed in the top of this small tree where it stretched it’s neck for a better view.

Before leaving we meet a photographer who had photographed this unusual warbler in the same area along the evergreen lined entry road. The photo was the best but we got out of the car and looked around a little to satisfy our natural curiosity. Well we never found the mystery warbler but we did stumble upon a very cooperative Blue Grosbeak. One of my favorite summertime birds and one that I’m always trying to get a good photo of. 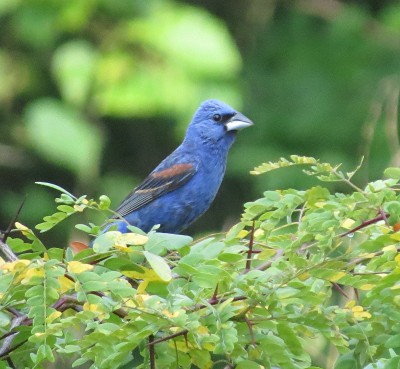 After Fernald Preserve we went to a new place, Governor Bebb Metropark. Birders have had some good luck with Henslow’s Sparrows and I’ve yet to see any this year.

Governor Bebb was a Whig politician who was born in Butler County in 1802. He was the 19th governor of Ohio from 1846 to 1849. After his governorship he was appointed by Abraham Lincoln to be the Examiner of the Pension Office in Washington D.C.

So to honor a native Ohio son they have this real nice 264 acre preserve named after him. Part of the preserve besides the fields, meadows and woods is a historic village that has several historic log buildings. They even have the Bebb Cabin built in 1799 near to where my wife grew up.

The sun was really cranking up the heat as the morning waned into the afternoon, but Jon and I wandered the mowed path through the meadow where the Henslow’s have been seen. Unfortunately no Henslow’s were seen let alone heard. But it wasn’t a total bust as we worked a wooded edge when we heard a Summer Tanager back in the woods.

Not a very good photo since I was shooting into a darker forest from a sunny location and at quite a distance.

The butterflies were pretty spectacular at Gov. Bebb Preserve, which included this Giant Swallowtail

The sun was baking now and it was time to call it quits. However we did have a pretty good list for the day despite the heat.

From 1951 till 1989 the Feed Materials Production Center at Fernald, near Ross Ohio, processed low-level uranium for use in nuclear bombs. Fernald is one of 2 former nuclear sites that have been decontaminated to the point where the public can visit. The other is Weldon Spring, a former Army facility 30 miles west of St. Louis. Both are part of the Department of Energy’s Legacy Management Program, which is in charge of the long-term management of sites that have been cleaned up.

Fernald covers 1,050 acres, with over 320 acres being grassland. With the addition of 7 miles of hiking trails you can see why this place is a great place to go birding. And one of my favorite grassland birds that frequents Fernald this time of year is the Dickcissel. And considering Fernalds past I don’t see in the foreseeable future any developments or soccer fields stripping this wonderful habitat.

It’s been hot in the Ohio Valley this week. Temps are reaching into the 90’s and the humidity has tipped that really uncomfortable level. So I headed out in the morning trying to see my target bird for the day before I started to melt. I wasn’t too log after arriving when I heard my first Dickcissel.

This is how you’d normally see them. Perched atop of a small tree or bush with their head thrown back singing. 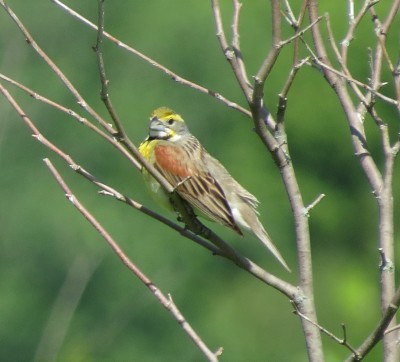 Eastern Goldfinch’s are a dime-a-dozen at Fernald, however I thought this photo was particularly good.

I can’t help myself, I’m a sucker for Eastern Kingbirds

days are drifting away and I’m still far away from my goal. However I did score 4 more birds today to bring my total to 87 for the month.

Note the short bill and neck on this Cackling Goose photographed through a chain-link fence and from quite a distance. 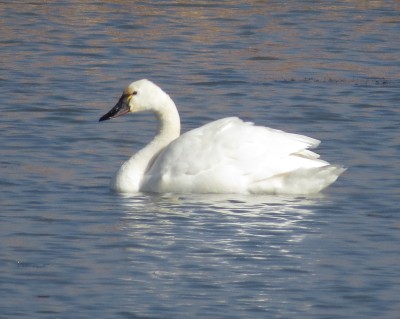 One of 6 Tundra on Lodge Pond at Fernald Preserve.

For some reason I’m not finding the time to keep the old blog updated, and for that I apologize. Life outside of birding has been a little hectic for myself and my family so please be patient with me as I’ll try to do a better job.

This last Saturday found my good friend Gene and myself on the road for a full morning and afternoon of some long distance birding. Still wanting to hit the jackpot with shorebirds has been kind of dismal down in this part of Ohio, so we were hoping for a turn of the coin in terms of find some good shorebirds. My plan for the morning was to hit the mud flats at Brookville Lake, however Gene had been at Lost bridge the evening before  and reported some good shorebirds, including a pair of Baird’s Sandpipers.

Anyway you slice it, it’s a 45 minute drive at the least to Lost Bridge from my house, and with the lighter than average traffic it still took 45 minutes. It was still early when we arrived and upon checking out the large dirt field next to Lost Bridge for shorebirds, we were disappointed with the lack of standing water and total lack of birds. And the same could be said about Lost Bridge. Even though there was plenty of exposed sand and mug under, and extending up river and down from the bridge, there was hardly any birds.

Knowing we had a long drive to Brookville Lake we decided to leave and get a head start to the lake. The far northern end of the lake is the best spot for any shorebirds. The water is very shallow, and in years past it has been a hotspot for some great birds, except today.

While driving down to the lake we would stop and do some roadside birding and had some good luck doing that. That’s until we made our way to the lake. The water level was still too high for the smaller wading birds, so we were left with the usual Great Egrets, and Great Blue Herons.

However upon doing some scanning of the Ring-billed Gulls that were congregating I noticed a Caspian Tern had joined the gulls. A nice bird for the day count.

We searched for many a minute for anything that would excite us, but to no avail. We needed a spark to the day so we made our way to Liberty Indiana to see if we could re-locate the Eurasian-collared Doves that have been known to hang out at these grain silos in the middle of town. ECDO are becoming more and more prevalent in this part of the country, even though eBird still considers them a rarity in Ohio, but in Indiana just over the border they aren’t. Anyway it was Gene who noticed 2 doves perched on a wire next to the grain silos. getting my bins on them I noticed the squared off tail and white undertail coverts, plumber in size in relation to the Mourning Dove sitting next to it. Even though I couldn’t see the black collar, the other field marks was dead on.

After having success with finding the ECDO, we started to make our slow drive back. With frequent stops at Fernald Preserve, Smith Tract Park we had a pretty good day count for the middle of August. Some of the sparrow species that were present just weeks earlier are now gone like Henslow’s and Grasshopper Sparrows, or they’re just not showing themselves. We did have a great look at both male and female Blue Grosbeaks, which I’ve seen almost every time I’ve been out this Summer.

Saturday was a great example of being able to spot quality birds in good numbers. Granted our objective was to find shorebirds, and we did find a few, however we made the best of the situation and came away with a nice number  of birds during these dog days of Summer. They’re out there, you just have to be both diligent and patient, and you’ll see them.