One of my new pet projects is to collect the Warbler photos I’ve taken over the years, delete the bad ones and store the average to above average ones in a new album on my Flickr page. The recent posting of my Prairie Warbler photos was the first in the hopes of getting decent shots to fill in the many blanks.

So yesterday I decided to head off to a local park where Louisiana Waterthrush can be common in the Spring. The park has a trail that cuts through a gorge with a nice flowing stream which is perfect. It was pretty quiet as I approached the area where they’ve been spotted recently. I hear their familiar song first. Now the tough part, locating the bird.

It takes several minutes before I’m able to get on the bird, then move into position to snap off dozens of shots before settling on this one. 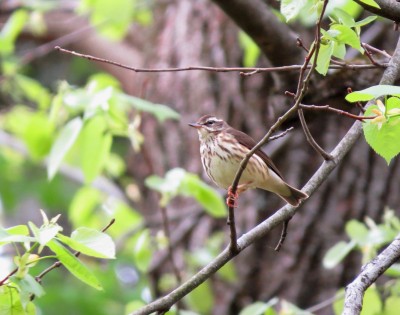 As I was about to leave for the day and head home I decided to check my local birding Facebook page to see what’s going on. Well it turns out Ellis Lake has a Wilson’s Phalarope and 2 Cattle Egrets. So off I go.

The birds in question weren’t either in the lake, they were in the agricultural field that was partially flooded from all the rain, and the fact that the area sits in a real low lying area that’s prone to floods. The park sits so low that bordering the park sits the ancient remains of the Miami-Erie Canal.

Well the cattle Egrets were pretty easy to tick off. 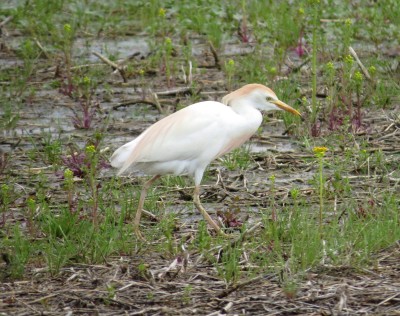 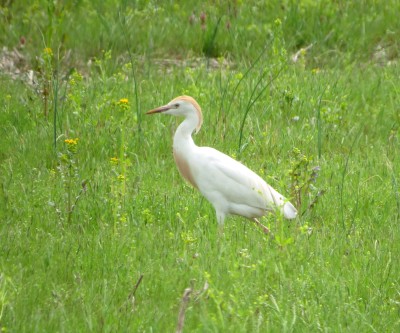 Now the Wilson’s Phalarope was another matter all together. From what I gathered from other birders was that an eagle flew overhead and scattered the flock of wading birds and moved them all further away and a little more difficult to observe. So trekking out into the muddy and through standing water i was able to get some terrible photos of a great bird. 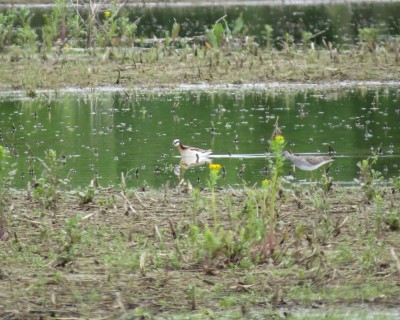 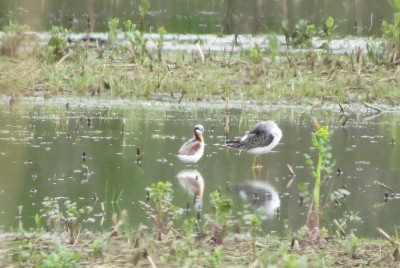 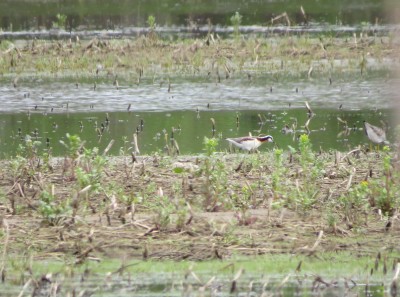 Posted in Notes from the Field, Uncategorized

I’ve been getting in a little morning birding this week while the weather’s been good and migration is still among us. I hit up a few of my regular spring time haunts hoping for some decent birds, and some photo opportunities. So I was off to Magrish Riverlands Preserve and Shawnee Lookout Park, both are great spots for migrant warblers. 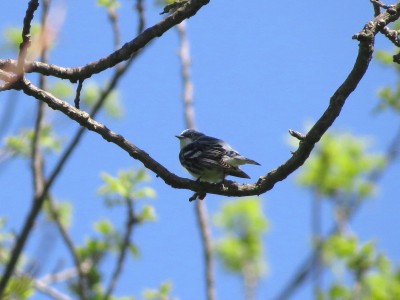 Cerulean Warbler has always been a difficult bird for me to photograph, and this individual located at Shawnee Lookout allowed me at least one decent shot, even if it’s not that great. 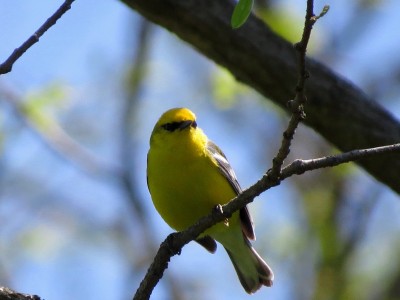 And how could you resist getting a shot of this Summer Tanager. 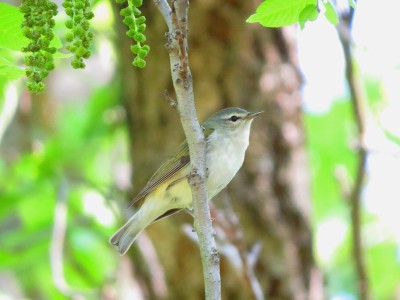 This Tennessee Warbler was found at Magrish Preserve yesterday. 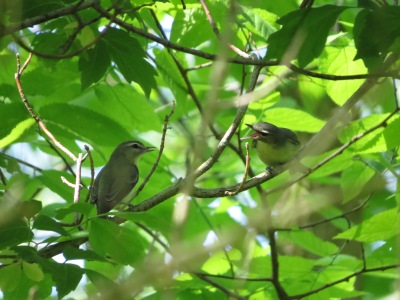 Also at Magrish was this male and female Red-eyed Viroes. As I watched the male was putting on courtship displays, which I’ve never seen before.

We all know that “Life” can certainly get in the way of some of our favorite past times, and I’m no exception. My first Grand Child was born and visiting with    him up in Michigan does cut into birding time. Then I was sick with Walking Pneumonia, which took several weeks to finally get over.

Our last child moved out of the house to Georgia and I had to help with that move. My wife and myself had some minor surgical procedures that cut into any birding time available. And when I did go birding it was usually up to Caesar Creek State Park to scan for ducks.

WHEW, I’m exhausted, and in  need of Spring.

So for the past week Pine Warblers have taken up residence at Mitchell Memorial Forest and with it being such a beautiful day I had to take off to check it out.

Pine Warblers are some of the first warblers that show up in the Spring. In the past I’ve had reasonable luck with locating them, but when they’re consistently in one location I’m all over it, especially since I don’t have any pictures of one.

After arriving it didn’t take long to locate one. All I had to do was listen for a song very similar to a Chipping Sparrow, but sweeter. 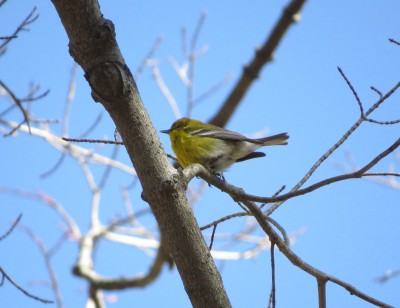 Sometimes all we’re going to get is a shot like this, from below, however diagnostic of the species. 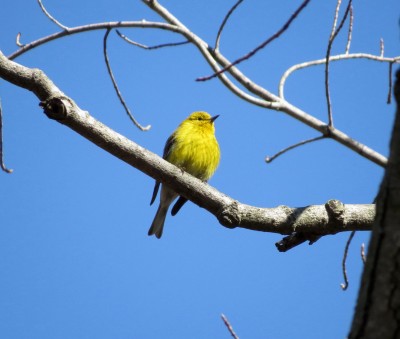 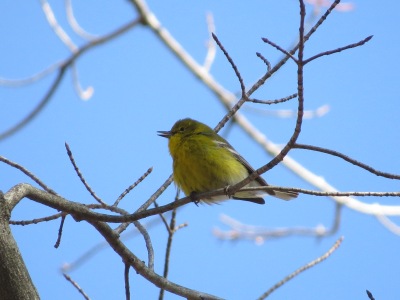 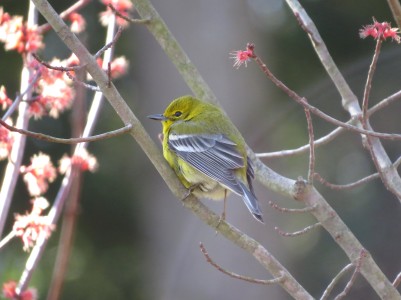 Then one of these little beauties flew in a small tree that was just beginning to flower about 20 feet away. Holy cow, how lucky can one get!

If only I could be awoken by the song of the Wood Thrush, then I think life itself would almost be perfect. 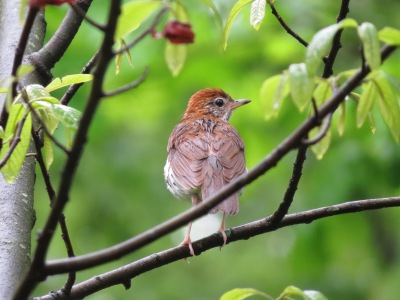 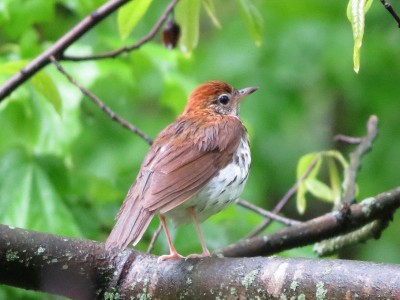 The Wood Thrush marks the beginning and the end of each day as it’s song never wavers. 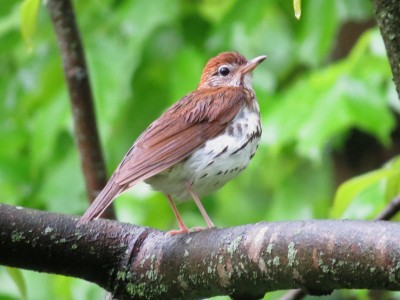 With the return each spring these beautiful birds returns my soul and slows my pace as I wander in the forest. 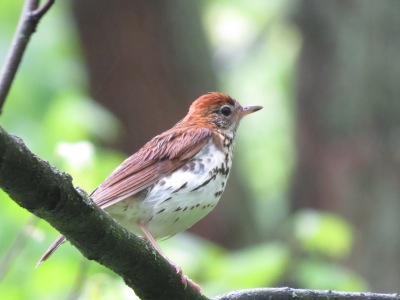 With some birds, we work to remember their particular song… 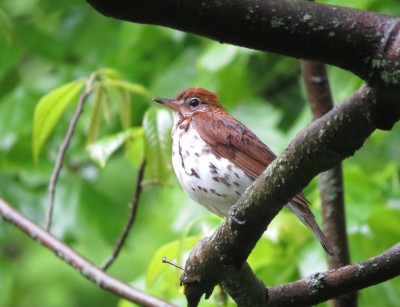 but the Wood Thrush is forever in me.

Shawnee Lookout Forest and the Oxbow

There were frost warnings out for the Tri-state area as I made my way over to pick up Jon for some very early migrant birding. Both Shawnee Lookout and the Oxbow can be particularly good, so with the rising sun low on the horizon we set off in a westerly direction.

Shawnee Lookout was practically empty as we set off on a couple of trails, always listening and watching. As we walked we chatted about which early migrant might make an appearance today. One at the top of the list was the Hermit Thrush. The reclusive skulker of the undergrowth is usually heard before it’s seen.

So it came as no surprise that one of the birds we stumbled across, right next to the trail was a Hermit Thrush eating a worm. 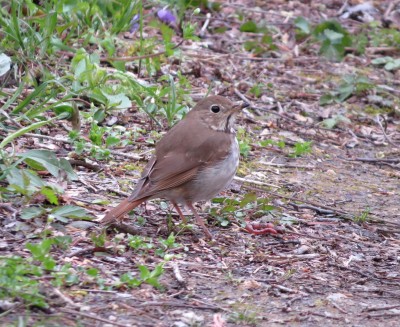 If you look real close you can see the worm on the ground.

Yellow-rumped warblers were the dominate, and only warbler species seen at Shawnee Lookout. In a couple of weeks this place will be crawling with migrating warblers, but this day wasn’t meant to be. However the male Butter-butts were all dressed in their best breeding plumage, and really it’s only a matter of time before more show up.

So as we were leaving Shawnee Lookout a question arises. We all know what happens when the chicken crosses the road, but what about the Wild Turkey? 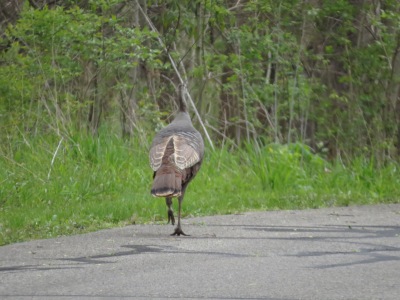 After a short stop at Lost Bridge to count the Pectoral Sandpipers and a couple American Pipits, we arrived at the Oxbow. And quite honestly I don’t know what impressed us the most, the sheer number of Double-creasted Cormorants (we estimated about 250) or the Bald Eagles, ( which we counted 18 of them). 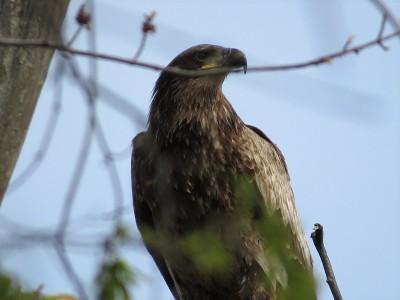 This immature Bald Eagle landed real close to Jon and me with a fish, and proceeded to eat it. I tried to sneak up it and get a better photo, but he didn’t that too much and promptly left. 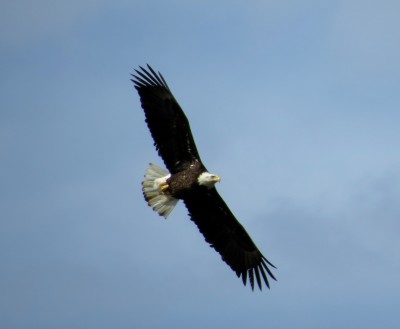 Nothing quite as pretty as a Bald Eagle against a blue sky.

At one time as we approached a line of trees that separates two fields we counted 12 individual Bald Eagles. It was quite a sight, but considering the distance a photo wouldn’t have done justice. However the bird of the day was yet to come.

As we continued driving along the dirt road that cuts through the Oxbow we notice small brown birds foraging along the edge. And one had white edges on the tail. I quickly pull over as we get our bins on the bird. Vesper Sparrow. Very good bird, especially for this part of Ohio.

Now you might be saying to yourself that this is a pretty common bird where I live, but in southern Ohio we have maybe a 2 week window where Vesper Sparrows can be seen before they move North. And this one cooperated. 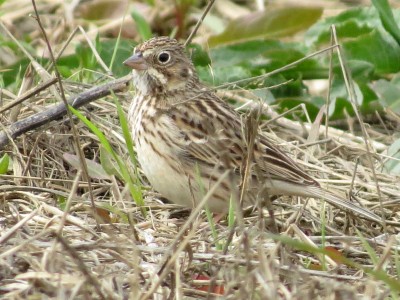 That’s the thing with Jon and me, we love Sparrows, and for us this was a great bird.

We made one more stop in Lawrenceburg Indiana where we walked a bike trail hoping to pick up the same birds we saw there during the Christmas Bird Count.

It was a good day. Notable birds for the day include:

I’ve neglected my blog lately…and I’m blaming work. Have you ever had one of those weeks where you come home after a super busy day at work and feel like just vegging out for the evening and go to bed early. That was me this week. And despite having a wonderful day birding with Jon last Saturday, I just couldn’t find the energy to sit down and write a blog post. Sorry everyone.

Like I said last Saturday Jon and myself hit the woods hard looking for migrants at some of our local hot spots. Shawnee Lookout Park, Lost Bridge, The Oxbow, Smith Tract, and Armleder Park.  It was a beautiful day and the birds on a whole were plentiful in some areas, however in others it wasn’t. Trying to find where the wading birds are can be a challenge, and last Saturday was no different as we tried several spots where we’ve seen them before, only to strike out every time.

Warblers were plentiful and as always another challenge for myself trying to get any kind of serviceable photograph. Our day list was pretty good, so instead of boring you with week old birding news I’ll just skip to the list of birds intermixed with some photos. You see I need to keep this blog post short because I still have to get ready for when I go to my favorite birding hotspot tomorrow, Boone County Cliffs.