With everything going on this year, it’s no wonder that I’ve been super lazy when it comes to updating this blog. It’s not that I’ve not been birding, I have. Just not lately. I did a good amount in the Spring as migrants moved through but it’s not the same. I miss going to Lake Erie for the big birding festival and battle the people on the boardwalks at Magee Marsh, and other hot spots along the lake.

And since the focus was staying at home and social distancing I immersed myself into my gardens. And since this is a blog about birding, know one wanted to hear about my gardening exploits.

All that came to a screeching halt on the 25th of August when a local Akron birder was visiting a local reservoir. He was there in the evening time close to sunset to watch the Purple Martins congregate into this huge flock of as they swarm. As my buddy Phil said, “A mosquito hasn’t a chance on this lake”. And as I watched several videos of this happening it was really quite exciting especially for the people in their kayaks which had front row seats of this spectacle.

The birders name was Henry T., and as he was waiting for the Purple Martins to start swarming he spotted a large brownish bird flying over the lake. He watched as it dove, return to the air, float of the water, and eventually fly over to a dead tree and perch. As his mind was turning as what this bird might be, it was after watching it closely on it’s perch he identified it as a juvenile Brown Booby.

So as you can imaging this bird became an overnight sensation. Birders were coming up from Kentucky and down from Michigan just to see this bird. And it has not disappointed. Always returning to it’s perch along the shore of the lake in the same dead tree, it’s close proximity to a parking lot and short walk in the woods has enabled birders to check off a pretty rare bird. Myself included.

Myself and Phil pulled out his driveway at 6 am for the 3 hour drive. It was a beautiful day, and a beautiful bird. 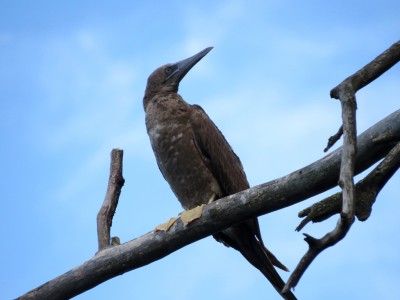 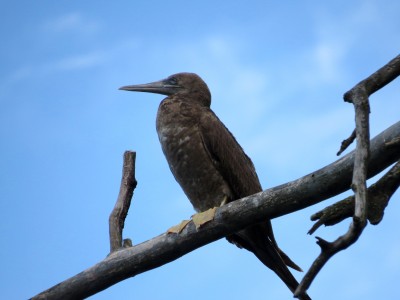 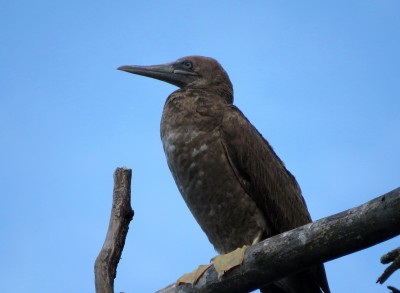 This entry was posted in "On The Road". Bookmark the permalink.