Even though I birded my eyeballs out while up at Lake Erie earlier this week, I couldn’t help myself to hit the road yesterday and pick up 3 very tough birds for the Tri-state area. Now don’t take this the wrong way however, birding up on the lake can be ridiculously easy and not very challenging when they can be only feet away from you. I was yearning for a couple of birds that are normally here in the area in sparse numbers and in only a few locations.

The first birds is a Bell’s Vireo. Last year there was not mention of one being here even after several efforts by some notable birds searching in the birds normal haunts. So when I read that the bird was back at Smith Tract on Kilby Road, I knew that was where I was heading yesterday. I really wanted to get a picture of this infamous skulker of dense thickets.

After arriving at 8 am I started my search in and around the storage barn located on the property. With the Bell’s Vireo you don’t look for the physical bird per se. You listen for it’s distinct call, then try to spot it. Trying to discern it’s call out of the Red-winged Black Birds, and Gray Catbirds was proving to be dificult, since they to have those raspy kind of calls that might mimic a Bell’s call.

Well after 30 minutes I was able to find the bird and follow it along this line of trees. Only a couple of times I was able to get my bins on it for a positive ID, but no photo. They are that reclusive. Satisfied, I moved onto Shaker Trace Wetlands at Miami Whitewater Forest for one of my favorite birds. Henslow Sparrow.

Last year I had great luck with these birds at this area of the park. a few of them would call so close to the road that I was able to digiscope one. Shaker Trace Wetlands has a paved bike trail that runs through the center of it, with a mowed path that can be used for horses that travels parallel to the paved path.

They to have a very distinctive, “HIC-CUP” style of call, that help in locating them in this vast open grassland. Making my way out to the “farm road” along the mowed path, I spooked up a very small sparrow that was hiding in the taller grass at the edge. It flew like a “Ammodramus” species of sparrow, low to the ground and kind of erratic. It flew across the paved bike path into the field on the other side. I got my bins on it and saw the tell tale ocher coloration on the face. Nelson’s Sharp-tailed Sparrow? I’ve seen them in the Autumn time, but not in the Spring. It soon disappeared into the grass like they normally do.

I worked the area pretty well with no signs of any Henslow’s. That was until I started to head back to leave. 2 of them calling from the tops of some short stubby bushes. The distance was too far for any picture, however just to able to see them is satisfying enough.

I continued to make my way back to the car, walking on the mowed path again when I kicked up yet another small Sparrow, which flew to the other side of the paved path again. Was this the same bird as before? This time it was out into the open, more or less. So I crept closer, ever so slowly.

Check out the coloration on the face and the fine streaking on the flanks. Nelson’s Sparrow, a very cool bird. 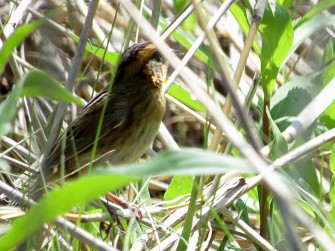 A little close, unfortunately with a stick across it’s face.

With it closing in on 1 pm I had to pull the plug on this great day of birding. I found my 2 target birds, with a bonus one. So as I strolled back I was able to get a few photos of some birds along the way. 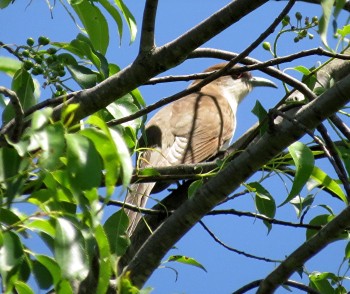 A Black-billed Cuckoo is always a good bird to spot. 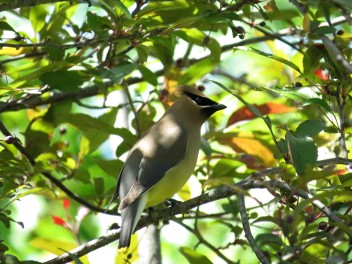 I’ve never had a lot of luck photographing Cedar Waxwings, but this one is pretty good.

I love this shot of a Common Yellowthroat.

P.S.    As for my pictures from my Lake Erie trip, I will start posting a few at a time as I get them through the editing process. With a couple of hundred pictures to sift through this is a time consuming chore that my take a few days. So thanks for your patience.

To rise bright and early to go birding has become almost second nature for me, even when I hardly got any sleep last night. I was up at 5 a.m. just like it was a regular workday, showered, dressed, caffeinated, gear gathered, topping off of the bird-mobile with go juice, and on the highway with a donut in my mouth by 6:30. Agenda for the day, meet up with the local Audubon Society for a morning of birding.

Kilby Road Ponds Preserve was a recent aquisition by the Hamilton County Parks for the sole purpose of keeping it in it’s natural state. With parcels on both sides of Kilby Road the park encompasses several hundred acres. This morning we hit both sides of the road, and had pretty good luck.

A view from a rise looking across some of the grass land the park wants to keep in it’s natural state.

This lake is owned by a gravel company which still operates here, hence it’s private property. From this view we were able to spot a Common Loon  on the water. Kind of unusual for this time of year.

Going across the street towards the Whitewater River, you enter an area that was once working gravel pits. They are now full of water and sustain all sorts of wildlife. The trial around this area totals about 3 miles and you’ll go by 5 good size lakes that were once gravel pits.

After spending about 2 hours here, it was time to head over to one of my favorite places to bird.

Joining the group today of 10 birders was Gary Stenger. Gary used to work at Fernald and now he is the local amateur expert on all things Fernald. As a matter of fact he still remembered me from when we put on the Bird Study Merit Badge Workshop earlier in the Spring. Very nice guy and very knowledgeable when it comes to birds and where to find them. A good many of the birds we spotted at Kilby Road, were also present at Fernald. We covered most of the grassland habitat behind the Visitors Center, including a trail that was off limits to the normal visitors. That’s the perk for having Gary along, we were able to visit with a family of Hooded Mergansers on a pond you normally couldn’t see from the trail that’s open to the public. With the way the land rolls and undulates, we would come upon a hidden pond that has Willow’s growing around the edge. If you were on the public trail, you would never know it was there. This was a special treat for the group to be able to go into restricted areas.

All told, we spent about 4 hours birding, before we went our separate ways at 12:00. However before we left I was able to get a fairly decent picture of a Dickcissel, which were fairly common at Fernald.

Notable birds for both locations include: